The customs agent stationed on the wharf wasn’t quite sure what he was seeing. An imposing, dark-haired woman with large brown eyes was preparing to board a ship for a voyage to the United States. Wrapped around her shoulder was what appeared to be a fur stole, embellished with an animal’s head (a rather gruesome accoutrement popular in the early 1900s). But was he dreaming, or was the head moving? “What is that?” asked the agent, suspicious. “Oh, it’s an Italian police dog,” the woman replied nonchalantly.

The agent allowed her onto the ship, probably having no idea that she was Rosa Ponselle, the dramatic soprano who was the pride of the Metropolitan Opera as one of its first native-born singers to achieve great renown.

The fur piece that Ponselle carried onto the ship was Italian, but it was neither dog nor stole. It was a living fox cub. Ponselle had been visiting the composer Giacomo Puccini at his home in Viareggio. He was clearly ailing, so he excused himself to take a nap. The gardeners, who told her that a fox cub had been found on the grounds, joined Ponselle. Assuming that the mother was dead or had abandoned the cub, they were preparing to kill the fox. That might not have bothered Puccini, because he was an avid hunter, but you didn’t kill any living being in front of Rosa Ponselle. She subsequently asked Puccini if she could adopt said fox, and Puccini answered the fox was not his, but God’s.

And so the “police dog,” which the soprano named Gioconda after one of her favorite roles, traveled across the ocean and took up residence in Ponselle’s elegant apartment. Treated to a diet of gourmet food, the cub ate as well as his mistress did. But with his added girth, he was starting to act more—well, more foxy. So, reluctantly, the singer presented him to the Bronx Zoo, where he soon died—perhaps a victim of the inferior cuisine. From Vaudeville to the Met

There were plenty of real dogs in Ponselle’s life. The earliest were Bessie and Bush, a Boston bull terrier and a black hound dog, who were residents at the farm of her Italian-born parents in Meridien, Connecticut (the family name was then Ponzillo.) Ponselle had no training in voice but sang well enough that when she was in her teens, she joined her sister, Carmela, in a successful vaudeville act, performing operatic arias, duets, ballads, and popular songs alongside the more typical acts of acrobats and trained bears.

At age 20, Ponselle’s big break came. Heard by a coach, who, in turn, asked Enrico Caruso to listen to her sing, the soprano so impressed the star tenor that he informed her she would soon perform at the Metropolitan Opera, sharing the stage with him. He then introduced her to Giulio Gatti-Casazza, general manager of the Met, who thrust a contract into her hands the very day of her audition.

Ponselle’s debut at the Met on November 15, 1918, was a major event in the company’s history. At age 21, she took on one of the most challenging dramatic soprano roles: Leonora in Giuseppe Verdi’s “La Forza del Destino.” As promised, Caruso was her partner in the role of Don Alvaro. This was the Met’s first performance of the opera. Not only did Ponselle get through it magnificently (despite being almost paralyzed by nervousness); she created more audience excitement than did her legendary co-star.

Ponselle remained faithful to the Met. During her 19 years with that company, she gave some 364 performances of over 20 roles, rarely singing elsewhere. Her Norma, Aida, Elisabetta (in “Don Carlos”) and Gioconda, among others, were unforgettable. From contralto-like low tones to a dazzling high C, her voice was rich and even throughout, her breath control amazing, coloratura clean, trill perfect, and intonation precise. Ponselle was also a powerful actress, deeply invested in her characters. Striking in appearance, she had lost a lot of weight after the vaudeville years, when she was—in her own words—”as big as a telephone booth.”

From the beginning of her career, Ponselle was passionate about animals. Her major companion during the Met years was the wire-haired terrier Whiskers, whom she had acquired in Switzerland. So devoted was she to the dog that, when he was once denied entry into a posh hotel restaurant, she and her four-footed companion walked across the street to a luncheonette and sat down happily with customers more appreciative of his charms. Whiskers, she claimed, was a very talented dog. He sang the scales when she sang and said his prayers at night.

Ponselle could not bear to be without Whiskers. When she performed at Covent Garden in London, the strict quarantine laws forced her to leave him at home. So lonely were dog and mistress for each other’s company that Ponselle had a friend accompany him on a ship to Paris, where, after leaving London, she had several engagements.

Perhaps Whiskers’ greatest claim to fame was on the occasion of a masked ball at the Metropolitan Opera. Garbed as a burlesque queen in a red spangled gown, Ponselle joined the Danish heldentenor Lauritz Melchior, who was over six feet tall and weight 250 pounds. A dog lover himself, he owned a Great Dane that, when it stood on its hind legs, was as tall as its master. At the masquerade, Melchior showed up as Salome and performed the “Dance of the Seven Veils.” But Whiskers, who came as himself and performed his “scales,” was clearly the audience favorite.

Another member of Ponselle’s chosen family was a squirrel that, as a baby, had tumbled from a tree on her property. Ponselle picked it up and kept it until she decided it might be happier in an open-air squirrel cage in Frederick, Maryland. But when the weather turned cool, she feared for its comfort and brought it back home, where she built a large cage in her solarium, complete with a tree limb and a dish of shelled nuts. (She didn’t want the squirrel to waste its energy having to shell them). She even sought a mate for the rodent, but evidently did not find one.

Ponselle married the son of Baltimore’s mayor in 1936. The marriage was not happy, and the couple divorced some years later. However, during the marriage, they built a monument to the soprano in the form of an Italianate villa surrounded by 40 acres and set in the rolling hills of Greenspring Valley near Baltimore. The white stucco mansion, erected in the shape of a cross, would have been totally at home on a hillside in Tuscany. Ponselle named it Villa Pace, in honor of her most famous aria: “Pace pace, mio Dio” (Peace, peace, my God) from Verdi’s “La Forza del Destino.” The doorway was graced with the first line of that aria, each musical note in the shape of a rose.

In 1937, Ponselle, who had just turned 40, suddenly announced her retirement. She claimed it was time to tend to her own life, rather than giving single-minded devotion to opera. Though her voice had retained its luster, she had lost some of her magnificent high notes and thus had difficulty in the great soprano roles in which she had prevailed; this, some maintained, was a further reason for her decision.

Her retirement from singing was, however, not a retirement from opera. From Villa Pace, where she lived for 44 years until her death, she became a pillar of the Baltimore opera scene, serving for three years as the first artistic director of the Baltimore Civic Opera Company. She held recitals and benefits at the villa, coached students, and watched over their careers. There was no greater social distinction in mid-20th century Baltimore than to be invited to Ponselle’s palatial estate. Among the guests were often other great voices of the time, eager to pay her homage. Ponselle biographer and friend James A. Drake offers a particularly colorful description of a typical afternoon at the villa where Ponselle entertained her admirers.

“Between four and five o’clock, the door of Ponselle’s second-story bedroom would swing open, leading to the long staircase in the foyer of Villa Pace. In an instant, a bevy of perfumed and coiffed poodles would begin a raucous race from her bedroom to the bottom of the stairs; their shrill barking would startle the four or more Persian and Siamese cats, the singer’s other favored pets, which silently roamed on the villa’s lower level. Soon Ponselle’s very recognizable form would be seen on the balcony that bordered the foyer and in a few minutes she would reach the top of the steep staircase. Then one by one, she would take the tiled steps in a calculatedly slow gait, her guests awaiting her below.”

Not surprisingly, given all the space at the villa, the number of animals grew exponentially. Most of them were dogs and cats. Reports differ as to the population of Dalmatians and standard poodles and angora cats over the years, and there were also lovebirds in pairs and a trained starling.

Life among the pets was not always peaceful. Ponselle’s Persian cat, Tee-Tee, chased by two of the dogs, leapt to her death from the roof of the villa. Most of the animals, however, died naturally, and were buried in the gardens of the villa. Near her 80th birthday Ponselle was photographed with her Siamese cat Norma alongside a smiling Luciano Pavarotti, who had greatly admired her when growing up in Italy and made a point of visiting her when he first came to the U.S.

On Christmas Day 1979, when Ponselle was 83, she and her friends were celebrating the holiday. Suddenly, a burning log in the library’s fireplace caught fire, and it engulfed much of the estate in flames. The damage was extensive, and it forced Ponselle to take refuge for days afterward with a community of nuns living across the road. No humans were harmed, but three dogs and two cats (including Norma) died in the library, where the flames and smoke were so intense that no one could reach them. Ponselle, almost blind by then, was not made aware of the losses. However, she created a trust for those that remained alive—five cats and one poodle. These were buried alongside all the other deceased pets, each grave marked with a small wooden cross and placed under a spreading oak tree.

Rosa Ponselle died in 1981. The New York Times obituary called her “indisputably one of the greatest operatic talents this county has even produced.” The bulk of her estate was left to convert Villa Pace into a museum and center for the performing arts. In 1996, the foundation that administered the museum was forced, for a lack of funds, to sell the villa to a private individual.

Ponselle’s memory lives on in a number of RCA recordings made at Villa Pace in her later years. The technology might have been primitive, but that voice, still rich and powerful, surmounted those limitations. 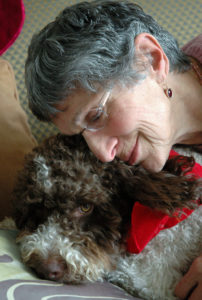