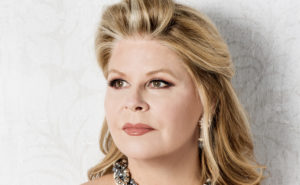 Susan Graham to Take on ‘A Standing Witness’

Mezzo-soprano Susan Graham and Music from Copeland House are set to perform “A Standing Witness” at Middlebury College and the Kennedy Center on Oct. 29 and Nov. 4, 2021.

The showcase will feature the famed mezzo performing the 65-minute work written for her by composer Richard Danielpour and author and U.S. Poet Laureate Rita Dove. The concert will also include music by Pierre Jalbert and John Harrison.

The work “takes audiences on a sweeping retrospective of momentous events and eras in American history since the pivotal year 1968. The entire work is based on commissioned poems included in Dove’s widely-praised new collection, ‘Playlist for the Apocalypse.”

There are also plans to perform “A Standing Witness” at Tanglewood, Penn State University, Orange County Performing Arts Center, and Performance Santa Fe, among other venues around the United States.

“A Standing Witness” previously premiered at the University of Chicago.