As Professor Higgins insisted, diction is everything. If one mentions the word “Rinaldo” in Madrid without clearly articulating the letter “i” as an Italianate “ee,” locals invariably start talking about the football superstar from the Stadio Bernabeu rather than an obscure baroque opera in the National Auditorium.

Obviously Handel’s “Rinaldo” is a different pitch altogether, although ambiguity is still inherent. In writing his first Italian opera for the London stage in 1711, Handel did such a cut and paste job of his earlier music there is only marginal originality in the partitura. Handel scholar Winton Dean avers that more than two-thirds of the music for “Rinaldo” was recycled from previous compositions, with varying degrees of success and frequent textual anomalies. Typical of the time, Handel made extensive revisions in 1717 and again in 1731 and tinkered with the score at almost every performance. Changes in plot were not unusual, arias were shunted between different singers, voice parts alternated and key changes amended depending on the artists at hand.  A definitive score of “Rinaldo” is as unlikely as an undemanding diva.

After languishing in operatic limbo for over 200 years, revivals of “Rinaldo” since the 1950s have differed enormously both in terms of stylistic interpretation and even musical content. Depending on cuts and da capo consistency, performances can vary in length by more than an hour. Pier Luigi Pizzi’s celebrated production in Ravenna in 2012 was almost a Baroque tweet lasting just over twp hours. British Early Music specialist and leader of the English Concert Harry Bicket is no stranger to this polyglot partitura, having performed and recorded it in 2001. With a performance time of 2 hours 45 minutes, Bicket is similar to Christopher Hogwood’s 1999 recording although considerably shorter than René Jakob’s 2001 reading which runs for almost 3 hours 15 minutes.

As “Rinaldo” in Madrid was in concert version, the spectacular stage effects which thrilled the aristocratic London audience in 1711, disappeared faster than Armida’s magic garden. There was no fiery chariot to deliver Armida from the skies to shriek “Furie terribili!”, no Harry Potter polyjuice potion for Armida to assume Almirena’s identity, and definitely no dragon-drawn chariots to whisk Armida and Argante off to safety in the 1731 revised ending. This meant that the singers had to make up for the lacuna of visual diversions and stage gimmicks with heightened acting skills, which for the most part were successful.

Considering the Queen’s Theatre in the Haymarket in London in 1711 was a relatively small space, the idea of bringing a Baroque ensemble of 24 musicians into a venue as large as the 2,300 seat Sala Sinfónica of the Auditorio Nacional de Música presented several acoustic challenges. Most obvious was the virtuosic harpsichord solo which concludes Act two. Albeit on the dry side, the acoustics of the imposing auditorium in Madrid were not entirely unfavorable to a smaller Baroque sound with oboes and recorders being particularly luminous. The raspy trombe da tirarsi sounded sensational.

The singers were for the most part well chosen. Luca Pisaroni was the most experienced performer in the cast with a wide operatic curriculum vitae,  particularly in the Mozart fach. Despite once remarking that “many Baroque singers only sing Baroque and this is not what I want to do,” Pisaroni is no newcomer to Early Music, having sung the perfidious Argante in Robert Carsen’s risible production of “Rinaldo” in Glyndebourne in 2011. His characterization of the imperious Saracen King of Jerusalem was suitably snarly in regal mode and obsequious when seeking Almirena’s favors and Armida’s forgiveness. Despite its incongruous references to Alecto’s hissing snakes and the tantrums of the sailor-snatching Scylla, “Sibillar gli angui d’Aletto (cribbed from “Aci, Galatea e Polifemo”)”  was arresting, and not just because of the stentorian tromba blasts. “Vieni o cara, a consolarmi” displayed a contrasting seductive timbre with beguiling phrasing.  There were similar sensual tone colors in “Basta che sol tu chieda” (plucked from “Agrippina”) which convinced the audience more than Almirena.

There has been considerable interest in young Polish countertenor Jakub Józef Orliński, not just because he has the remarkable distinction of being as comfortable in the arcane world of Baroque music as that of hipster break-dancing. Both skills were put to excellent use in Frankfurt last year where he sang the title role in “Rinaldo.” Perhaps Orliński missed the wild physical exertions of Ted Huffman’s direction as his facial expressions as Eustazio in this concert version seemed a tad exaggerated, but that said, the character is hardly the most charismatic Crusader in the Levant. Vocally, Orliński was on more secure ground and there was much to savor in his silvery vocal timbre and intelligent phrasing. There was lightness, crisp articulation and animation in “Col valor, colla virtue” and “Siam prossimi al porto (which Handel later recycled as “Oh who can abide the day of His coming” in “The Messiah”)” was sung with mellifluous elegance and evenness of tone. The higher tessitura of “Di Sion nell’alta sede” displayed Orliński’s formidable fioratura and redoubtable technical skills and the rollicking 12/8 rhythm was marked but not labored.  There was excellent breath control on the sustained “Oggi solo” phrase and roulades were consistent and acuate. On the basis of this sterling performance in a relatively small role, Orliński has a promising future – with or without the break-dancing.

In “Lascia ch’io pianga,” the role of Almirena gets the opera’s most famous aria, even if it was lifted from the 1707 oratorio “Il trionfo del Tempor e del Disinganno” and, before that, from the 1705 opera “Almirea” as a sarabande. The ever-pragmatic Handel wasn’t going to let a great tune go to waste. American soprano Joélle Harvey gave an absolutely stellar interpretation of the sure-fire showstopper. This was lyrical vibrato-less baroque singing at its finest with some exquisite upper register piano extemporizations, including a gossamer-light top C in the da capo. “Che sospiri” was phrased with ineffable pathos but eschewed crass sentimentality. Bicket’s gentle tempo with sensitive string playing and the sentient continuo of viola da gamba and theorba added immeasurably to this deeply moving rendition. Obviously, there is more than one aria to the part and Harvey sang all of Almirena’s music with a purity of timbre reminiscent of Elly Ameling. She also appropriated the lilting 6/8 “Il vostro maggio” Siren’s aria in Act two with delicious lightness but doubtful erotic irresistibility. “Combatti da forte” had plenty of pep and the oboe obbligato complimented Harvey’s pristine intonation and long F natural trills admirably. The heavy ornamentation in “Augelletti, che cantata” was impeccably executed with limpid crystalline clarity. Flauti dolci and solo flauto piccolo made a jolly chirpy contribution.

American mezzo Sasha Cooke is an acclaimed interpreter of Mahler and added considerable vocal weight to the rather dull role of Goffredo. The characterization was not as interesting as the rich color of Cooke’s voice and it was hard to imagine this Goffredo as the fearless leader of the First Crusade. “Sovra balze scoscesi e pungenti” had some plumy chest notes and the semiquaver roulades on “il suo tempio” were almost Horne-ian. Similarly, the long roulades on “t’intendo” in “Mio cor, che mi sai dir?” were sung with distinction. The Adagio “Sorge nel petto” aria, with sparse viola da gamba and theorba accompaniment and splendid solo violin ritornello, was both restrained and refined. Regrettably Goffredo’s sprightly “No, no, che quest’alma” aria was cut, as was “Solo dal brando.”

The stroppy sorceress Armida is definitely the most fun role in “Rinaldo” as the character is almost a combination of the Queen of the Night and Cruella de Vil. Armida also has some of the most demanding music in the score and from the first à capella bars of “Furie terribili!,” Handel makes it clear that this Queen of Damascus is scarier than a rabid Daesh devotee. Canadian soprano Jane Archibald made a commendable effort to meet the arduous exactions of the role, but with qualified success. The huge leaps, sustained D naturals, interpolated high B flats and rapid roulades were accurate enough but with a tendency to push and turn strident in the upper tessitura. “Ah! crudel, Il pianto mio” continued the vocal pyrotechnics in the presto section with some outstanding oboe d’amore and bassoon obbligati. The bravura aria ends with an extended solo for harpsichord which reputedly Handel improvised himself at each performance to the delight of the star-struck audience. Tom Foster scampered over the keys at a fiendish pace and justly deserved the thunderous applause which followed.

Iestyn Davies is a countertenor of refreshing ingenuousness and impeccable musicianship and his Rinaldo was exemplary in all respects. From the first minor third steps in “Ogni indugio d’un amante,” it was clear Davies is a singer with not just a formidable vocal technique and excellent diction, but innate musical sensitivity. In “Cara sposa, amante cara,” Davies displayed superb legato with a peerless evenness of melodic line.  The contrasting Allegro section showed a hint of metal in a voice normally characterized by its honeyed lyricism. From low D sharp trills, sustained B naturals, and meticulously controlled crescendi to wretching phrasing on “Dove sei,” this was a tour-de-force performance of what Handel considered to be the finest aria he ever wrote. The rapid semiquaver  roulades in “Venti, turbini, prestate,” ably assisted by some virtuoso bassoon playing, ended Act one on a very high note, even if it was technically only a mid-stave G natural. Curiously the triumphant “Or la tromba in suon festante,” with its four raucous trombe and pounding timpani accompaniment, was slightly lacking in vocal puissance but the echoing trilling was exciting.

Kings of it All

Top laurels of the performance, however, went to Harry Bicket and the English Concert. Founded in 1973 by Trevor Pinnock, this is one of the world’s leading exponents of baroque music and every member of this noticeably mixed age ensemble played their original instruments with concerto soloist avidity. Contrabass virtuoso Christine Sticher, viola da gamba guru Joseph Crouch and bassoon wizard Alberto Grazzi were particularly impressive. Instrumental sections such as the Christian march and battaglia sinfonia were “al trionfo” with real “furore” in the passionate playing. Bicket’s overall reading tended to be more measured elegance than cheap-effect ostentation, but there were still plenty of fireworks, either royal or rube, when required. Ole’s all around.

Lovers of Baroque music in New York will be able to experience this outstanding performance for themselves when the English Concert’s “Rinaldo” comes to Carnegie Hall on 25th March. 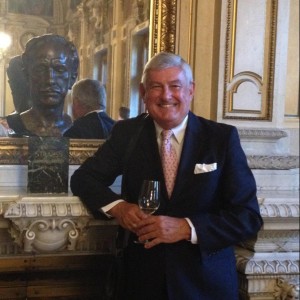 Born in Australia, Jonathan Sutherland holds degrees in History and Law from the University of Oxford and diplomas in Music from the Sydney Conservatorium of Music and the Hochschule Mozarteum in Salzburg.
He is also an internationally acclaimed concert pianist specializing in the music of the 1930s.
Jonathan’s first operatic experience was hearing Maria Callas sing Tosca in Covent Garden and he has since heard performances in all continents of the world including over 60 different productions at the Wiener Staatsoper.
He has written for The Australian, Opera Today, The Opera Critic, and Bachtrack.
Jonathan speaks fluent English, French, German and Italian and when not reviewing opera and orchestral concerts, divides his time between the south of France near Nice and Split in Croatia.