Ligeti’s operatic version of Ghelderode’s work, “The Ballad of the Grand Macabre,” was premiered in Mexico on Sept. 11, 2019 at the Nezahualcoyotl Concert Hall with a second performance on Sunday the 13th at the main hall of the Palacio de Bellas Artes, both in Mexico City. The performance was labeled as a multimedia concert and was produced to be the closing night event for the 41st Manuel Enriquez International Forum of New Music, in collaboration with the Vértice Festival of UNAM.

Bringing “Le Grand Macabre” to Mexico is not an easy task. The opera tells the story of Nekrotzar, the Grand Macabre, who comes to destroy the world but he gets drunk and ultimately cannot accomplish his duty. Putting the death on the stage is a complex proposition for a country that has a big culture of death: Posada’s famous Catrina is an example of that, as is the yearly celebration of Dia de los muertos with corpse-shaped breads included.

Ligeti’s work deals with the absurd, with death failing the main task, but also plays with the excesses of life, illusions, political ambitions, and many other problems. Yayoi Uno Everett, for example, says that Le Grand Macabre is governed by two narratives – the grotesque and the existential irony. These elements are part of the continuum in the narration and are, of course, part of the problem when staging that work in Mexico. One solution to this problem would be to elaborate a production close to the different representations of the death in the Mexican Pop culture, as well as the funny elements of the grotesque; the other could be to do something striking to the eyes.

Oscar Enriquez, the video artists for the projections in this performance, decided on the second one.

Both performances started with a disclaimer that the video to be projected on screens did not reflect the point of view of the performers, nor institutions, and contained strong images of real dead people; it also afforded the opportunity for people to leave the hall at any moment.

The video was interesting with many ideas that sometimes helped to match the music, the text and the image. When Venus appears, who in the score is suggested to be performed on stage by a striper and backstage by a singer, the video showcased a naked lady exploring different positions in front of the camera; this call to Venus and the changes of the camera reminded me of the Venus of Willersdorf. It was a nice link between the roots of sensuality, and also motherhood. The drinking scene displayed on the screen a group of people partying around a table, including a renown music critic. They were getting drunk and lost in their lust, in their talk, in their frenzy.

But not all the images worked well. Several images were repeated without any particular contribution. The scenes of necropsy impacted most of the audience, and were undeniably disgusting. However, one might read them as part of the elaboration of a hyperrealistic grotesque perspective. Moreover, Ligeti’s description of the first scene is the “remains of an old, decayed graveyard, choked with overgrown weed.” Thus the representation of the destruction and loss should be there. Ultimately, it seemed that video projections in the first part were far stronger than those in the first.

The costumes were mostly what one might expect from a concert performance. However, it is essential to note that the wardrobe for the female singers were all the same, giving unity between, for example, Mescalina and Venus, but also extending the movement of pleasure when the text narrates the passion of Amanda and Amando.

Ligeti’s work is indeed a difficult task and the requirements for the orchestra and performers are very high.

Luckily, the Eduardo Mata Youth Orchestra of the University, under the musical direction of Ludwig Carrasco, was adequate for this work and he achieved positive results via the control of orchestra, good management of tempi and excellent coordination with the singers.

Anabel de la Mora sang the famous chief of the police, Gepopo. Her singing was difficult to hear at the premiere, but improved at the second performance. She also performed Venus.

Prince Go-Go was performed by Flavio Oliver, who sang a wonderful prince. The fact that he was fully off-book (most of the cast had it in hands or referred to it constantly on a music stand) allowed him to take on the character and express his emotions both vocally and physically. Oliver was very good vocally, always precise and expressive.

Eugenia Fuente was a very good Mescalina, as was Rodrigo Urrutia as Astradamors. Hugo Colin took on Piet, while Hernán Iturralde was Nekortzar. Colin was solid, always with control of his voice. Meanwhile, Iturralde had stronger vocal output in the first performance, but was not quite on the same level in the second one; nonetheless, he displayed good technique, volume, and expression.

In general, this was an excellent performance with the only concern being that it was not presented for more than two shows. 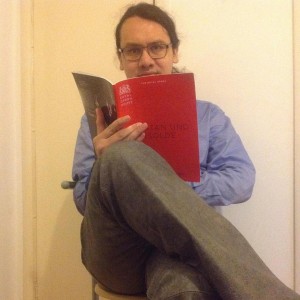 He is an opera researcher and producer. He is involved in a new production of La Clemenza di Tito to open in November 2018 at the historic Gran Teatro Llave of Orizaba Veracruz. His online course on opera and politics is about to start in July at 17, Instituto de Estudios Criticos, at the same institute he has taught courses on opera and gender and the influence of opera in the society. He is now a Ph.D. candidate at The University of Nottingham with a research on the relationship between opera managers and opera audience. He aims to help in the development of opera projects by opera companies, cinemas, or emerging opera managers. He has participated in important congresses on opera studies in Nottingham, Finland, Denmark, and Mexico. He contributes frequently with the Mexican Cultural Centre but also has published in Pro Opera Magazine.