Venetian composer Luigi Nono is no stranger at the Salzburg Festival. His operas and instrumental works have been regularly played here over the past decade. However, his most outspoken and outraged work, directed against the persistent violence perpetrated against innocent people was presented at the festival for the very first time. “Intolleranza 1960” premiered at Teatro La Fenice in Venice in 1961, at a time when social and political tensions across Europe were reaching a crescendo. Seeing it in 2021, at the most conservative and prestigious musical festival on the continent, was both appropriate and timely.

Tenor Sean Panikkar portrayed the lead role of The Emigrant while his Companion was played by soprano Sarah Maria Sun and a Woman was sung by mezzo-soprano Anna Maria Chiuri. A Torture Victim was embodied by South African bass Musa Ngqungwana, while An Algerian was portrayed by baritone Antonio Young. All excelled in this vocally difficult and physically challenging production.

There was nothing ‘usual’ to the performance. The opera did not start with the maestro entering the pit, nor with audience plaudits or the first chords of the overture. As the lights in the Felsenreitschule hall went down, silence settled in. Human whispers and movements gradually crept into the darkened scene before an a cappella chorus emerged, as if a group of angels had descended into hell to sing about the meaning of life. Beams of light shone from above while high-pitched notes from the orchestra pierced the gloom.

A Ringing Tone of Outrage

Luigi Nono built his score with a mixture of sounds, vibrations, noises, and with a masterful use of silence. He went further than Gustav Mahler in challenging the limits of the human ear and the acoustics of halls. The orchestra was reinforced with 26 winds and 40 strings. The space to the left of the stage was given to 12 drummers, each equipped with cymbals, triangles, and tam-tams. The space to the right was given over to three timpani players, as well as harp, celesta, marimba, vibraphone, tubular bells, and glockenspiel. This sound was truly all-encompassing, big and energetic.

Over the course of the opera, we see The Emigrant attempt to escape his bleak life and hard labor in a foreign mine. In a nameless city, he is arrested by police during a protest that is already underway when he arrives. Panikkar’s part is full of high Cs and up and down scales. He finds melody in those lines and combines them with a convincing stage presence in his all-black outfit. A ray of light and hope–and a beautiful lyrical moment for Panikkar–comes when he meets His Companion at the peace demonstration. Sarah Maria Sun brings tenderness and passion as she emerges from the crowd, displaying her iron will and strong voice, determined to fight for a better world.

A Journey Through a Human Hell

A Woman, who once hosted The Emigrant in the mining village, sung by Anna Maria Chiuri, appears as a fury clad in dark robes, stirring up waves of anger and intolerance. Her deep voice and stygian figure embody the darkest forces and notes of human nature. Even darker parts come when protesters are arrested and tortured by police. The Emigrant befriends An Algerian, Antonio Young, and they agree to flee from their misfortunes in a duet sung with a police and prisoners’ chorus in the background. Bass Musa Mgquangwana is A Torture Victim, who wants to escape as well but lacks the power to do so. Mgquangwana’s deep lamentation goes down almost to the bottom of the human vocal range. He sits in the middle of the stage surrounded by circles of police and prisoners, embodied by dancers of the BODHI PROJECT and SEAD–Salzburg’s Experimental Academy of Dance–whose sinuous motions recall the hellish circles of Dante’s inferno. The whole opera seems to be a lamentation upon human existence. One finds oneself wondering how people born as innocent children turn into monsters. This thought is reinforced through a video projection on the wall, showing a toddler and his mother in a playful scene and serving as the backdrop to the atrocious tortures being committed onstage. To Those Who Come After Us

The Emigrant and His Companion leave the city and reach the banks of a great river: the border to his homeland. At this moment, however, the river overflows its banks, flooding everything. Dancers and soloists run in panicked circles, from time to time emerging to the surface to gasp for air before they are sucked under and swept from one side of the stage to the other. Finally, the water overcomes them all and they are swallowed completely. Now we cease hearing their voices. Then, an a cappella chorus forms a rainbow. The opera ends with a stanza from Bertolt Brecht’s poem “To Those Born After;” ‘You, who shall emerge from the flood […] think of us with forbearance.’

Stage director Jan Lauwers introduced into the opera one non-singing character who was not part of the original libretto by Luigi Nono, the Blind Poet. In Part One, this character, played by Victor Afung Lauwers, stood as a silent witness, hearing and absorbing the world and sounds around them. Part Two started with his monologue to a crowd onstage, where he spoke about the untold stories of human suffering. His musings were received with both laughter and anger by the watching crowd. The Blind Poet was pulled off his pedestal and beaten. Only The Emigrant helped him to escape and heal his wounds.

The world has definitely changed since “Intolleranza 1960” was performed for the first time in Venice in 1961. But the timeless truth of Nono’s music seems relevant today more than ever before. His distinctive voice was raised to change things and make the world a better place. Let us hope that the forces of humanity and tolerance will one day win in our wild world of sounds and actions. 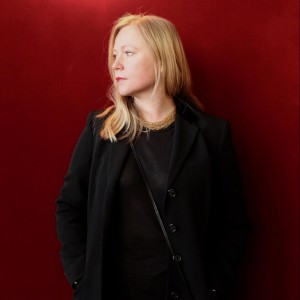 Katerina is a former journalist and radio producer at the BBC World Service and Radio Free Europe/Radio Liberty. She lives in Central and Eastern Europe. Katerina follows musical events and new opera productions, and enjoys writing about them.