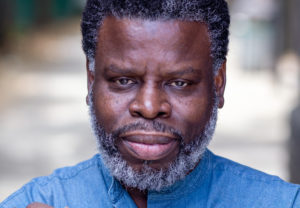 Q & A: Stage Director Femi Elufowoju Jr on His Debut as the First Black Opera Director at a Major UK House

Femi Elufowoju Jr is a practitioner of many crafts. He’s a screen actor with 15 credits, a stage director who has been at the helm for myriads of productions, and a film director.

But there was a missing piece. Elufowoju Jr is a music lover and comprehends the enormous power it can have over an audience.

The missing piece was, of course, opera. In January 2022, Elufowoju Jr will make his debut as an opera director at Opera North in Leeds, UK, making him the first Black director to run a show at a national house. He is a true trailblazer. As he noted in our conversation, there is no one in whose footsteps he follows.

When Opera North offered Elufowoju Jr the opportunity and asked what opera he’d like to direct, he gave them a list of three. “Rigoletto,” “Il Trovatore,” and “La Traviata.”

“Give me Giuseppe any day,” the director quipped as we discussed his love for Verdi.

In the end, “Rigoletto” won the day, and so the British-Nigerian director will lead a cast comprising people of color in a new telling of an audience favorite, the details of which he is keeping close to his vest.

However, there is one aspect of “Rigoletto” he wants to make pop, and it’s Monterone’s curse. When he speaks those words, the audience knows something tragic is coming down the pike, and they’re waiting for it. He likened the way Verdi builds the tension to that of film director Quentin Tarantino’s infamous ear-slicing scene in his film “Reservoir Dogs.” Verdi’s slow boil from the initial malediction to the death of Gilda is like Mr. Blonde’s drawn-out, sadistic dance with a straight razor.

In this OperaWire interview, I spoke with the actor/director about “Rigoletto,” Monterone’s curse, and being the first Black opera director at a major UK house.

OperaWire: What drew you to direct an opera?

Femi Elufowoju Jr: The unadulterated role that music plays in telling our stories is something anyone who knows me would tell you I’m absolutely nuts about the function that music and songs play in the artistry of any work I get involved in. [With opera], I’m now thinking about that constant exhilarating buzz that orchestral music will give me and my audience on this new journey; ensuring that my thrill and buzz in the work transfer successfully to our audience is my super-objective for being a director of opera.

Music is universal; you don’t actually need to know what’s going on. There’s something that music does which tells you that it’s okay. It’s okay to breathe, and it’s okay to just sit and listen. Music allows you to be. There are no rules for listening to music. I mean, this sounds really banal, but there are absolutely no rules.

All you need to do is sit and have your ears open and let your imagination flow. And that, for me, is almost my passport for creating the work that I do. Because once that music comes on, it’s there as a reassuring sort of invitation to allow your audiences’ imagination to roam free, and to feel secure.

If there is any doubt about where a particular motif or theme is heading towards, what music does as a composite element of your storytelling tool is it allows that comprehensive understanding to be met. And that’s why I work with musicians. Because when you’re failing in your ability to exact an idea, you’ve always got music and movement in the same way because they go hand in hand, movement, dance, the narrative, allow me to succeed.

OW: How was the opportunity presented to you?

FE: So, one of the last things I was able to do as a theatre director in London, just before the pandemic, before the first lockdown was a production of Tennessee Williams’ “The Glass Menagerie.”

They often say that you never know who is in your audience. As directors, we’re never in the audience every single day. Nine times out of 10, we leave after opening night, so I wasn’t there when Opera North came to see my production. The invitation to Leeds followed. And of course, it started with the question, “Would you like to direct opera?”

I felt really blessed. It reminded me of my debut as a theater director. All those many years ago when Philip Headley was running the theater on Stratford East. And when he invited me into his building, and he said, “Femi, so, yeah, you’re going to be here for two years, what do you want to do?”

And I remember saying, “What do you mean what do I do?”

“Are you giving me a choice?”

It felt like that again when Opera North asked the same question. I gave them three, and they were all Verdi’s; “Rigoletto,” “Trovatore,” and “Traviata.” And they said, “Let’s go with your first choice.” That was it.

I don’t say it often to too many people because it feels there’s something quite fraudulent about the dream, that that’s how it would happen for everyone. At the age I am, I feel really, really blessed that I can do it. Because I thought I’d missed the boat.

OW: Verdi has captured your imagination. Why is that?

He deploys music with Piave; both of them hand in hand become agents of master storytelling. It’s as if he said, “These are the themes, and we’re going to use this score to heighten the reality and heighten the tension of spectacle.” That is why I love Verdi. He is incredible at being incisive, and he’s very unapologetic.

OW: I’ve always found Monterone’s curse as a key driver of the narrative.

FE: The world of the supernatural, the world of curses, the world of darkness, and witchcraft, and all whatnot, were things for which I didn’t have any spectrum whatsoever before I left for Nigeria as a 12-year-old. I was brought up on Aesop’s “Fables” and the bedtime stories were just characteristically banal in terms of their sort of range of imagination, but while they were very successful in sending me to sleep, they never quite provoked my thoughts.

Once I got to Nigeria, and all these stories and themes and ideas of how life and culture can intercede, interact, and interface became very, very strong and primal for me. So, I knew the idea of the curse before I was 13, as well as the power and the potency of a curse before I returned to New York, 10 years later. And so, when you hear people passing on the streets in London, and they go, “Yeah, back off. What are you talking about? You can’t frighten me, what does that mean?” And, you’ve got the background that I’ve got; I know some of these curses come true. I know that it’s backed up with power, belief, and believability.

When it’s as potent as someone telling you about yourself in such a way that they’re putting that curse up with history and culture and tradition, you begin to believe it if you’re a Nigerian, and that’s why I really want to ensure that my Monterone when he lashes out with that curse, my God, the entire building is going to shake.

I’m just going to bring what I know and how it resonates with me, and how it should resonate with Rigoletto. I feel really, again, the word blessed is coming out of my mouth because we’ve got [bass-baritone] Sir Willard White; he is the elder statesman of the opera world in the UK and from Europe. And for the world that we are going to present, he is an elder statesman for truth. So, when you cross that man, when you’ve crossed this culturally astute character of vintage years, when he curses or when he speaks, you’ve got to take him seriously.

My Rigoletto and Gilda, my Monterone, my Marullo, my Borsa, they are of color, and they’re going to be rooted in the background of the culture that has evolved through centuries, from ancestry and through generations. They would know what a curse is when they hear it. So, when Rigoletto is impacted by the curse, he knows what the ramifications of that are.

OW: What does that mean to you to be a Black man directing an opera at an established house in the UK?

FE: It means a lot. I’m not going to lie. Because I don’t have any mentors, but there are people working on the fringe.

Pegasus Opera staged “Treemonisha” (Scott Joplin), which I saw in maybe 1993 in South London. That was the first opera company I knew of color in this country. They don’t actually work in the main houses. And sadly, I think they should be given more opportunities in our big houses.

I was made aware of a guy named Michael Hunt who now runs Cape Town Opera, and he worked extensively here in the UK up to about 20 years ago. But he’s not here now; he’s now in South Africa.

So apart from people running Pegasus Opera, I just do not know anyone out there who’s of color and directing in the major houses. And so, I feel that the novelty of being the only Black male, British Black director working in British opera, there’s something; how can I put it? There is a bit of me going, “Well, I’ll be known as the only one working in this medium, for now.” But there’s also another side of me that says it’s an indictment of the world that we’re in now that there hasn’t been many more, if not me, and I don’t have contemporaries.

So, I want to be a shining light and a beacon of hope for those coming from behind. And I think I’ll be making that my mantra that it may be only me, but there could be many more.

There is no pressure, but there is a duty I feel I have with this production, to make it as beautiful, successful, penetrative, meaningful, poignant, and memorable, so at the very least, I could say, “This is what we can do, and there should be more of them.”

OW: And the cast comprises people of color, as well?

FE: We’ve got five principals who are of color. It will be noticeable. These are individuals who wouldn’t necessarily be in those roles if we didn’t enable them to live those existences.

But color shouldn’t be the focus because, at the end of the day, I really want to set the writing as it is. But I think from a political point of view and from a cultural point of view, I think color institutionalizes the theme in a way that we probably wouldn’t have thought.

Non-black members of the audience will be gaining insight into a cultural phenomenon, which they probably just took for granted in a particular way. So, I want culture and sensibility to be something that comes out in a more profound and unique way.