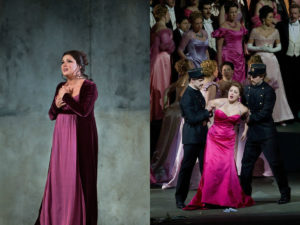 On This Day: The Interpreters of Verdi’s ‘Il Trovatore’ & Massenet’s ‘Manon’

I imagine that upon reading the title of this article, you were probably confused about the arbitrary pairing of Verdi’s “Il Trovatore” and Massenet’s “Manon.” The former is an opera in the Bel Canto style, firmly looking backwards in both its subject matter and style while the latter is one of Manon and French opera’s more progressive operas. The former requires a balance cast of dramatic singer, the latter a star duo of lyric interpreters.

That the two operas premiered on the same exact day, Jan. 19 (“Trovatore” in 1853 and “Manon” in 1884) is obviously pure coincidence. But it is notable to point out that despite their disparate styles and challenges, there are many great artists that have bridged the gap between these two iconic works, taking on both operas. Here is a look at those very artists.

Most remember Scotto for her powerful portrayal of Manon in Puccini’s “Manon Lescaut.” However, she performed the role in Massenet’s opera later in her career. One of the her famous appearances in the role was in 1983 when she performed the role with her frequent collaborator Alfredo Kraus at the Lyric Opera of Chicago. Interestingly enough the role came after Scotto performed Puccini’s iteration of “Manon.” She also sang the role way after her Leonora in “Il Trovatore.” The soprano performed Leonora at the Metropolitan Opera in 1976 and 1977 as well as in Paris in 1975. While critics noted that Scotto lacked the vocal qualities for Leonora, it was evident that she had the conviction to portray the role and it made for an unforgettable night.

Netrebko was a prominent Manon in Massenet’s opera for the first part of her career. She sang the role in Los Angeles, Berlin, New York and London as well as Vienna. Her performances in the role were almost always sold out due to her electric stage presence. She gave her final performances of the role in New York before replacing the Massenet “Manon” with Puccini’s “Manon Lescaut.” Two years after singing her last Manon the soprano transitioned into a Leonora for Verdi’s “Il Trovatore.” She quickly became the most sought-after Leonora’s in the world and since then has performed the role in Berlin, New York, Salzburg, Paris and is currently rehearsing her first run in Vienna. Both her Manon and Leonora can be seen on DVD and one will notice the development of Netrebko’s voice as it darkened.

Ricciarelli, a specialist in Italian Bel Canto as well as Puccini and Verdi, moved into unknown territories at times. Sometimes the roles were right for her voice and sometimes they just overpowered her. But Massenet’s “Manon,” which she performed in 1987 with Francisco Araiza, showcased her lyric sensibilities. However, what Riccirelli lacked was the high flying notes required for the role. Still she was a success in the title role. As for “Il Trovatore,” Ricciarelli performed the work in the early 80’s in Torino and even recorded it with Jose Carreras. The opera suited her middle range perfectly and it showed her strength as a Verdi soprano.

Caballe had a huge repertoire that ranged from the lyric repertoire to the dramatic, so it is no surprise that Caballe performed both roles. However, Manon was never a huge part of her repertoire. She performed it early on in her career and there is a live performance recording from 1967 with John Alexander. The recording features the soprano’s fresh lyric voice and her flexible coloratura. But like Ricciarelli, Caballe lacked the high notes required from Massenet’s score. She sang the role in Barcelona numerous times. While the role did not last in her repertoire, the Saint Suplice remained part of her concerts for years. “Il Trovatore” on the other hand was part of her repertoire for years and she performed the role in New Orleans, London, Florence and New York among others. There are numerous live recordings that audiences can revel in and Caballe’s floating legato line is always a marvel to listen to.

The great Italian tenor was one of the most famous Manrico’s of his time. He always stole the show with his endless High C at the end of “Di Quella Pira.” But it was the strength of his voice and his perfect Italianate sound that made him so appealing in this role. One can see the way he poured his soul into the role in the Metropolitan Opera’s DVD as well as in the many recordings he left of the great Verdi role. But most forget that he actually sang the role of Des Grieux in Massenet’s “Manon.” The tenor sang it early in his career with Mirella Freni, albeit in Italian. As many may know Pavarotti never learned French and even for his legendary performance of Donizetti’s “La Fille du Regiment,” he memorized the text.

Alagna is one of the few tenors who has been able to balance lyric repertoire with dramatic works. Throughout the years he has made Manrico a signature role. He has performed it in London, Orange, Paris and recorded it in 2002 with Antonio Pappano and Angela Gheorghiu. He is currently working on a new production with Netrebko at the Vienna State Opera. Meanwhile Des Grieux has been in his repertoire since he recorded the work with Gheorghiu in 2005. Since then he has performed it with Netrebko in a legendary production from Vienna State Opera in 2007 and then again in 2010.

Known as the Golden voiced tenor, Vargas has always been smart about the repertoire he takes on. For years  he performed works from the lyric repertoire and as a result Des Grieux was part of his roles. Notable performances in included a live stream from Vienna with Diana Damrau in her role debut. He also performed the Saint Suplice scene with Renee Fleming on Opening Night at the Metropolitan Opera. However, what most of people don’t know is that the Mexican tenor tackled Manrico recently in his career. In 2012 the tenor sang the role at the Canadian Opera and in 2014 he went to the Bellezas Artes to sing another run of the demanding role.

It would be a surprise if Placido Domingo was not on this list. Domingo has sung the most roles of any singer in the history of opera so a spot on this list was a definite. Domingo sang Des Grieux only twice and his appearances in the role happened at New York City Opera and at the Vancouver Opera in 1969. Des Grieux was Domingo’s first Massenet part as he would later take on “Werther,” Rodrigue in “Le Cid” and Jean in “Herodiade.” As for Trovatore, Domingo first sang Manrico on March 14, 1968 in New Orleans and went on to sing 50 performances in Hamburg, Vienna, New York, Philadelphia, San Francisco, Fort Worth, Paris, Madrid, Munich, Zurich and Frankfurt over 21 years. He also left numerous recordings of the role and one DVD. He also famously performed the role with Pavarotti at the Metropolitan Opera on Opening Night in 1993. One thing that makes Domingo unique is that he has also sung the Count in “Il Trovatore.” In 2013 he sang the role in Berlin alongside Netrebko and repeated it in 2014 before retiring it from his repertoire.

Di Stefano had one of the distinct sounds of his time and many will say that the lyric tenor should have never entered the dramatic repertoire. His voice was perfect for Massenet’s “Manon” as he could easily float a pianissimo and turn it into a forte. And these were the qualities he brought to Verdi. His reading of “Trovatore” is not that of a dramatic but one of a lyric who takes Verdi’s line and sings like it is Bel Canto. It shows audiences another way to interpret the role and if it is noticeable that he pushes his voice at times, his lyrical moments make up for the pushed parts.

One of the leading interpreters in Verdi, Alvarez has made numerous recordings of “Il Trovatore” and has performed many new productions of the role in New York, Milan, Torino and most recently in Paris. However, years before all the Manrico’s Alvarez began as a lyric and sang Des Grieux numerous times. He famously performed with Fleming at the Metropolitan Opera and Paris. In those  recordings the tenor’s bright and youthful sound is present and there are hints of what audiences would get later in his career.

The world’s leading tenor started out as a lyric singer before moving to the heavy repertoire. He was known for his work in Mozart and his French repertoire. Des Grieux was one of his last lyric roles before moving into the heavier Puccini and Verdi roles. He last performed the role in Chicago with Natalie Dessay in 2008. From there Kaufmann went on to sing Verdi’s “Il Trovatore” and debuted the role in Munich in 2013. The very interesting part of Kaufmann’s performance was that he repeated the “Di Quella Pira” and still managed to hold the final B Flat. The result was rave reviews. Kaufmann went on to reprise the role a year after but since than has shelved the role from his repertoire.