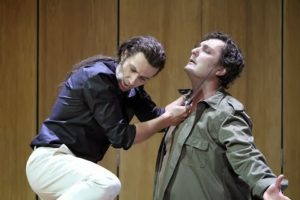 Verdi’s “La Forza del Destino” is a messy work. Premiering first on Nov. 10, 1862 in Russia and then reappearing in its revised and finalized form on Feb. 27, 1869, the opera is clearly one that experienced tremendous transformation over the course of those seven years.

But it’s messiness doesn’t necessarily derive from these compositional edits, but from the work’s very structure, or seeming lack thereof. When you look at past recordings or even modern production, you will find this opera altered, cut, re-arranged in manner only rivaled by the composer’s own “Don Carlo.” The busy cast also adds to this as many of the subplots feel less integral to the opera and how they impact the main protagonists’ plight.

But if there is one thing that Verdi nails poignantly is the central relationship of the opera. Not the one between Leonora and Don Alvaro but between the tenor lead and the baritone Don Carlo.

This failed brotherhood dominates the opera from its get-go and ultimately develops its story.

As the title might suggest, this opera, perhaps more than any other Verdi work, is defined by duets. Verdi was always a genius of ensemble writing and his pairing of two or more voices is often more fascinating than the solo writing he provides. But there is no other opera defined by the interplay of two voices more than this one.

In sum, these two characters have a whopping four duets between them over the course of the opera, all of varying styles and forms. In fact, what is most interesting is the development of the relationship through the forms they take on.

They start the opera as adversaries, but they don’t know it. Their first exchange is when Alvaro saves a wounded Don Carlo prompting the two to sing a brief “Amici in vita e morte” in harmony together. Their voices are perfectly synchronized for the first time and only time in their vocal exchanges throughout the entire opera. Until later. We get similar vocal overlap and unity in the ensuing duet “Solenne in quest’ora,” another circumstance in which one character is vulnerable and the other is there for his aid (this time in reverse).

This duet is a bit longer than “Amici in vita,” but they are far briefer than the two that follow. Safe to understand that the unity between these two men isn’t meant to last all that long.

The two duets that follow are far more developed emotionally and nuanced in exploring their contrasting relationships. “Chi mi chiama,” which is often cut out of the opera in earlier recordings, is perhaps the most underrated duet of all. It starts off rather cordial and cool, Don Carlo showcasing his newfound anger toward Alvaro. The latter isn’t really in the know about his rivalry but will come to know it. He spends most of the duet pleading with Don Carlo, particularly in the central lyrical section “No, d’un imene il vincolo.” In this very section, he is appealing for the two to be united by marriage with Leonora. Verdi’s characterization of Alvaro here through his music is a massive callback to Bel Canto style, the melody fully developed a la Bellini. Carlo’s response emulates Alvaro’s line, but with snappy rhythmic vocal interjections that give it a sardonic quality. It remains civil, expressing the characters’ nobility. But slowly grows agitated as Carlo promises death. Alvaro explodes suddenly and the piece moves toward a faster “cabaletta / stretta” section reminiscent of bel canto style. The two trade off on the main melody of this section before slowly building to the climax.

More of the Same?

The final duet, “Invano Alvaro ti celasti al mondo,” plays out in much the same manner. Alvaro and Carlo play off the main melody in different manners, one pleading and the other mocking. But there is one major shift emotionally in how the characters are portrayed. While Carlo is ruder and more condescending, Alvaro is more desperate and broken. Their voices do overlap a bit more in this duet, emphasizing the contrasts even further than in the previous duet. Hearing just one voice in the previous duet at a time adds to the tension of not knowing how the other will respond. But in this duet, the tension builds from the get-go through Alvaro’s emotion, not through suspense. Verdi even gives the character another melody to plead his case, “Sulla terra l’ho adorata,” furthering his sense of desperation in this duet as opposed to the previous one.

As is the case with the previous duet, this one closes with a “stretta” section, though it is more explosive and violent than the previous one, emphasizing the growing hate between the two, on both sides. Carlo even throws out racist terminology, calling Alvaro a Mulatto.

Alvaro does stop himself briefly at the end of this duet from attacking, something he is unable to control in the previous duet. But when he does explode, his thirst for blood is even greater.

And to clinch it, they sing of this violence TOGETHER (they close out the previous duet together as well, but the connection here is far more pronounced).

While there are a ton of duets in this opera, these four outline a relationship between two characters. Take them out of context and perform them back to back and you can get a truly wondrous sense of how the dynamics shift for both men. That is the genius of Verdi.