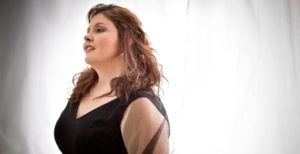 When people talk about soprano Angela Meade, the first thing that they associate with her is one name – Verdi.

The soprano has almost become synonymous with the great maestro from Busseto, her star thrust into the spotlight when she made her Metropolitan Opera debut in “Ernani” in 2008.

Since then she has championed Verdi, singing some of his most famous works while also giving audiences a chance to reconsider some of his lesser known operas including “Stiffelio,” “I Lombardi” and “I Due Foscari” among others.

“Verdi is like a great movie. His operas have great melody, great pomp and circumstance and Verdi is the most audience friendly music that there is,” she told OperaWire in an exclusive interview.

But for Meade, being in her position as an international opera star is a privilege that she feels requires exploration into other repertoire. That desire to seek out new works and roles has been a cornerstone of the American soprano’s recent years and will be a major part of her 2017.

Meade’s journey to explore new facets of her artistry starts this Tuesday, Feb. 28 in Naples, Florida where the soprano will move away from the opera or concert stage (the places you are most likely to find her) to a much smaller place – the recital hall. Meade, of course, gave many recitals during her student days, but it is far rarer know that she has become a leading soprano.

“It is an opportunity to really sort of be there face to face with the audience with no barriers between myself and the pianist and the audience. So it’s like doing a concert in a living room for your friends and family. And this theater in Opera Naples only seats 300 people.”

The recital, which will feature her alongside Ramón Tebar represents her debut with the company and will feature repertoire she never gets to sing.

“I’m doing four sets of songs and I will do a couple of arias. It’s a varied program that has some Strauss and some Meyerbeer and some Bellini pieces. Then we have a couple of things like Strauss and Liszt. I’m going for the Germanic although the Liszt is French.”

When exploring the art song Meade noted that there is a huge difference in the approach. “I think singing art song is a different edge and turn than it is to sing Opera arias. Like I said it is a much more intimate setting. There is more emphasis on the textural pinging of words that sometimes you don’t get much of in opera. It’s definitely a different style.”

Rossini & Mozart at the Met

Once Meade finishes her art song exploration she heads over to the Metropolitan Opera. While the recent Met announcement of the 2017-18 season has created great anticipation for her “Norma,” a role that is “like going home every time I go to sing it,” Meade is most excited about singing a Mozart favorite in the legendary house for the first time.

The role in question is Donna Anna in Mozart’s “Don Giovanni,” which will mark her second Mozart role at the Met. The first time she took on the composer in New York was in 2009 when she stepped in for one performance of “Le Nozze di Figaro.” But this time, she gets a full run to showcase her work in this repertoire.

“I’ve done it various times before but I am excited to bring it to the Met because it will my second Mozart but it will be great to have Mozart back to the Met and have audiences see me in a different light. People don’t always associate Mozart with people who sing Verdi so it will be nice to see a different context.”

Aside from “Norma,” Meade will also be showcasing her talent in another style in 2017-18 when she headlines Rossini’s “Semiramide.”

This is not a role debut but will represent her first staged performances of the opera. When Meade first sang the role in a concert version at the Caramoor Festival, the soprano had audiences cheering and critics raving about her coloratura and the flexibility in her voice. Meade will be the first soprano since 1994 to perform the role at the Met and she could not hide her excitement.

For Meade, the experience of singing the opera first in concert has many major benefits.

“You have to know what the words are. You have to be able to emote with your face and not a lot of body movement to get your point across. A lot of time if you are doing a production for the first time and you’re doing it staged you start thinking of other things and your focus goes elsewhere.

“So it’s really helpful for me to be able to do it in concert first. Not everything is like Falstaff. which is totally fine staged first. But definitely, these Bel Canto things are really helpful to sort of focus on the music and the words first of all.”

A New Bellini at Caramoor

The dive into new repertoire continues this summer when the soprano makes a return to the Caramoor Festival, taking on Bellini’s “Il Pirata” for the very first time in her career and performing the opening night gala.

Being a major interpreter of “Norma,” the chance to take on another heavy Bellini opera feels like a natural step for the American soprano.

“I think that the heavier Bellini pieces like ‘Norma,’ ‘Beatrice di Tenda’ and ‘Il Pirata’ sort of require the same technique as there is a lot of emotional gravitas in it that you don’t get in something like ‘Capuleti e Montecchi’ or something lighter. It requires the same set of skills that any of the dramatic coloratura rep requires. I sang the final scene on a concert with the Washington concert opera and it was similar to a lot of Norma’s music combined with the cabaletta of ‘Casta diva.’ It’s similar and I think it’s going to pose the same sort of challenges and the same type of rewards.

“I think it’s so beautiful, to begin with because he is so great with melody and long lines that he gives you in a lot of the cavatinas and ensembles. That’s really rewarding to be able to spin out these beautiful lines and pay attention to the text and really immerse the audience in it.”

Getting a New Handel on the Baroque Repertoire

One final area that Meade is excited about exploring is the Baroque repertoire, one that seems miles away from everything she is so well-known for. In November, she heads to Washington to make her role debut as Handel’s “Alcina.” Meade has always had an affinity for Baroque music since college when she first did “Agrippina” and feels that the music is actually quite in line with all the other repertoire she has mastered to this point.

“I think that Handel and Mozart are sort of an extension of Bel Canto. I think the sound of baroque music is haunting and beautiful. It’s actually very sexy.”

Most importantly, it will also be an opportunity to show audiences another side to her artistry. As she puts it, “People typically think I’m a Verdi singer because I have a large voice. They never think to cast me in lighter stuff like that.

“But I want to keep diversifying my rep and exploring new things. Works like ‘Giulio Cesare’ or a ‘Rodelinda’ would be great. Why not? As artists, we should always be looking for new things to say and express.”