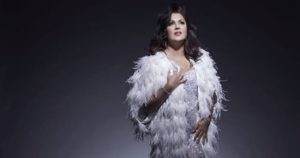 On Friday, Oct. 26, the Metropolitan Opera Guild presented its Annual Luncheon to honor the career of superstar soprano Anna Netrebko.

Titled “Amazing Anna” and taking place at Cipriani 42nd Street (and without too many flowers as per the honoree’s request), the event was befitting of the famed diva, proving entertaining and breezing by in a way that these events don’t always manage. A lot of major stars of the opera world were there and it was clear everyone had a blast.

While there were many gems littered throughout the evening, there were undeniably some highlights that can’t be overlooked.

The event didn’t really focus on Netrebko for its first quarter-hour, with Mezzo Denyce Graves kicking off the event by highlighting the essential educational initiatives undertaken by the Guild. Master of Ceremonies and Met Opera Guild President Richard J. Miller, Jr. then mentioned that it was time to turn the spotlight on the honoree and introduced a stunning video tribute that took the viewer on a quick tour through the soprano’s career, kicking off with her famed appearance at the Baden Baden Gala in 2007.

The first footage isn’t even about her singing but all about her dancing about the stage before she launched into “Meine Lippen, sie kussen so heiss.” The video would be bookended with another clip from this very concert. We saw Netrebko’s roots in Russia, including videos of her performances as a youth.

The video traversed her growth into a consummate diva, even chronicling her status as a fashion icon and her blunt honesty in other moments. We got highlights from some of her famed Met performances.

A year ago, Peter Gelb came on stage to give a speech to honor Renée Fleming. But before he did that, he took care of the elephant in the room, which revolved around the Met handling the accusations against former Musical Director James Levine. He was strong in that performance, and he was just as good at this event, albeit with a different approach.

With no dark themes surrounding the company, Gelb was far lighter this time around, poking fun at his relationship with Netrebko. At one point he noted that the best thing he could do with Anna was let her have her way because she knew best. “To all you singers out there, don’t get any ideas,” he followed up, drawing laughter.

He also made light of the controversy regarding Anna Netrebko’s blackface for the recent production of “Aida.” “We discussed which shade she would be, but she resolved the issue by going to a tanning salon,” he stated.

He also revealed that Netrebko would reprise the role of Lady Macbeth in Verdi’s “Macbeth” in 2019-20. He also hinted that she would be taking on the role of “Salome” in future seasons.

But his big moment came when he literally stated that Anna Netrebko was the opera world’s answer to Beyonce. Mic drop.

A Violinist Steals the Show

Every year, there is a performance given to honor the distinguished guest. Usually, there are opera singers performing for opera singers, even if they don’t necessarily sing traditional repertoire (as was the case last year with Luca Pisaroni’s showcase).

But this year, violinist Joshua Bell was called in to honor Netrebko. Bell told the story of how he had heard the Russian diva during the time that he was recording his album “Voice of the Violin.” He called up Gelb, who was still with Sony, and asked him to bring Netrebko onto the project. They recorded “Morgen” together for the album and performed it at other junctures.

Bell chose three opera selections. The first, the Meditation from “Thais,” was originally written as such for the opera. Bell played with an expansive tempo and tasteful portamento throughout. It was a gentle and rather understated performance, rich in tonal beauty. He contrasted that with Sarasate’s arrangement of Bizet’s Habanera for violin. This piece is all about flash and Bell didn’t miss a note as his played danced with the variations on the central theme, ending in a furious sequence of presto doublestops.

Then he played in his own arrangement of “Quand m’en vo” from “La Bohème,” accompanying soprano Larisa Martínez. The soprano was in vibrant form, but Bell’s violinist arrangement, with octaves on the main melody at one point and some unique ornamentation on transitional passages stole the spotlight with its unique approach to the famous aria. It was a nice change of pace and unexpected for the event; a truly fitting tribute for the most spontaneous soprano on the planet.

Zeljko Lucic was supposed to be main speaker on the evening but Miller noted that the baritone had come off performance of “Tosca” the night before and would be performing the following afternoon in “La Fanciulla Del West.” For that reason, he had been replaced with Joseph Calleja, who has worked extensively with Netrebko. Calleja’s tone was jovial and fun, poking fun at diva stereotypes and even noted that “I used to sing more frequently with her, before Yusif stole all of my gigs.” This latter joke drew the most laughter of the evening. Another moment that drew great laughter was when he noted the soprano’s history with directors.

“Usually I tell them what I want, and they agree.”

But ultimately, he praised his colleague for her generosity and commitment to great performances.

“What you see is what you get in the best sense of the term,” he praised. “I could tell you that she’s an impossible woman, that she refuses to rehearse, that she devours directors, slaps tenors [he turned to Eyvazov at this moment and said, “Maybe sometimes”], and terrorizes the entire company. After all, Anna is THE diva and we all know that divas are occasionally spoiled, capricious, and generally impossible creatures. Well this is certainly not the case… She’s a lovely, fun-loving woman. Gracious, supportive, and I can honestly say that never did she use her star power to throw a tantrum of any kind.

Netrebko’s speech was rather brief and to the point. But it wouldn’t be Netrebko without some fascinating if not brief moments. At one point she asked that the next luncheon be given at night instead of dinner so that everyone can go and party afterward (Miller later reiterated that it would remain a luncheon). But then as she walked away from the podium she stated, “Thank you very much. Please get drunk and enjoy the rest of the day.”