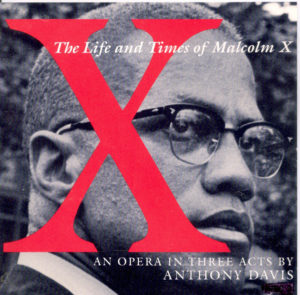 “X, The Life and Times of Malcolm X,” an opera by Pulitzer Prize-winner Anthony Davis, premiered at the American Music Theater Festival in Philadelphia on October 9, 1985.

The work, which tells the story of the life of the minister and human rights activist Malcolm X in collaboration with the composer’s cousin, librettist, and writer Thulani Davis, was built upon for the New York City Opera in 1986.

The work has since been performed throughout the United States, returning to the NYCO in 2010 in an abridged version.

The story begins in 1931 in Lansing, Michigan at the childhood home of Malcolm X. The first scene takes place during a local meeting of Marcus Garvey’s Universal Improvement Association, concerning two white supremacist groups terrorizing Black people in Michigan. Malcolm’s father is announced as murdered by a white mob, while the children are taken away from their mother.

By 1940, Malcolm lives with his sister in Boston, yet is imprisoned after an altercation fueled by racists. While in jail, he is first exposed to Islam.

Malcolm’s influence in the Nation of Islam grows as he establishes temples throughout the Northeast. As civil rights leaders such as Rosa Parks and Martin Luther King Jr. become active on the national scene, Malcolm explores the importance of embracing African culture in America, including the rejection of white names, hence his own renaming.

After commenting on the assassination of President Kennedy in 1963, a major schism emerges in the Nation of Islam between Malcolm and Elijah, his mentor. Malcolm leaves America for a period to take the Muslim pilgrimage to Mecca and travels around the African continent. He returns to riots in Harlem and disunity within the Nation of Islam. The opera concludes moments before his assassination.

Here are some selections from “X, The Life and Times of Malcolm X.”