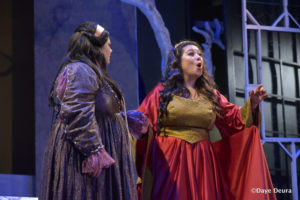 As New York Opera Fest continues, audiences are treated to performances of vibrant contemporary works, as well as exciting classical ones. Regina Opera’s production of “Il Trovatore” serves as a strong example of the latter, favoring a traditional approach to staging that highlighted the unfolding musical drama while taking very little away. Add to this a passionate cast of artists and you have a highly-accessible work that can be enjoyed by newcomers to the genre and those more seasoned.

The sets bore a constant eeriness thanks to the use of red lightning, to bloody the sky and blur sense of time, and gnarled trees, creating a suitably grim atmosphere for the tragedy which befalls the characters. These details also serve as a reminder of the surrounding civil war. The costumes could be broken down into knights, nuns, gypsies, and rangers; scenes that featured the ensemble often carried a colorful mixture of these groups. Naturally pardoning the lack of actual fire, the only real shortcoming as far as the set came in Act two’s anvil chorus “Vedi le fosche notturne.” Opting instead for a more-portable pillar, the firm, wooden clacks this surface made lacked the satisfying metallic ring.

In the role of Manrico, tenor Gerardo Gaytan carried a boldness that did not lack for vocal beauty. His offstage serenade to Leonora featured an ardent, spinto ending that justified the Count’s fears of a romantic rival. When both men had drawn their swords and readied to duel, Gaytan’s frequent glances to the conductor, coupled with the moment’s dramatic urgency, made it seem as if he were raring for the musical signal to cut down his fated enemy. With Galina Ivannikova’s Azucena, Gaytan took on a more deferent, almost-awed weight as he learned of his origin from his adopted mother. Manrico’s Act three cabaletta “Di quella pira,” carried urgent, fearful tones from Gaytan, with his strong conclusion earning a great reception.

As the gypsy Azucena, Galina Ivannikova exuded a vengeful gravity; her initial foreboding found expression with the canzone “Stride la vampa.” Phrases such as “The baleful flame rises to heaven,” were treated with an anguished, almost-shuddering vibrato; the full toll of this dreadful intensity was seen when Ivannikova is brought to the floor after revealing how she gave her own infant to the fire. As she has Manrico swear to murder the count, her frantic forte repetitions left no doubts about her bloodthirst.

In the role of Leonora, Dilara Unsal was often a source of great sonority; her Act one aria “Tacea la notte,” displaying a classic vocality as she highlighted phrases such as “like the fleeting image of a golden dream.” Rising to a fuller rejoicing, Unsal’s powerful cadenza saw her physically taken aback, creating the impression of breathlessness from her emotional outpouring. Her agile vocal leaps in and runs in the cabaletta “Di Tale amor,” however, proved she was anything but breathless. These qualities and more returned in Act four; joined by the plaintive lower woodwinds Unsal sighed away the phrases before her aria “D’amor sull’ali rosee,” which gave way to soft and sad ornaments. After resolving upon death to save Manrico, Unsal’s falling cadenza seemed to mourn all that she was losing before gorgeously rising above her sorrows.

Rounding out the main cast was Robert Garner as Count di Luna. While Garner maintained a dangerous edge towards Manrico, his interactions with Leonora suggested a genuine affection. His Act two aria “Il balen del suo sorriso,” carried tender, ornamented lines, and his pained expressions conveyed a need for healing love as he readied to abduct her from the convent. Just as convincing was his frustration upon losing Leonora yet again to Manrico, while the lovers escaped, the curtain fell with the count’s forces still on the offensive. This frustration was given full vent in his Act four encounter with Leonora; as he tensely paced around her, his phrase “the more you love him, the more my fury blazes,” strongly hinted at Leonora’s tragic offering of herself. All his intensity and anger was wonderfully undone when Azucena reveals his relation to the now-deceased Manrico; the horrified count fell to his knees while the gypsy rose triumphantly.

As Ferrando, bass Geeseop Kim skillfully delivered the expository number “Di due figli vivea padre beato,” carrying a strong, earthy timbre. His story rising to an exciting height as the gypsy enters to allegedly bewitch the count’s child, his somber descending lines worked well with the strings to highlight the sense of coming tragedy. His retinue of guards made for a lively chorus, with two sleeping off to the sides during the overture, they were often up to something to pass their time on the stage between moments of great intensity, such as engaging in a sparring match with staffs as the crowd entertained itself with the mismatched skills of the two fighting.

Two performances of Regina Opera’s “Il Trovatore” still remain, taking place on May 18 and with another cast on May 19. Audiences will find much to enjoy from the company’s traditional but satisfying take of Verdi’s tragedy.