A group of students from the Bard College Conservatory Graduate Vocal Arts Program have come together to present a virtual recital experience, titled “Wherever the Road May Lead.” Inspired by Poet’s Walk Park and other locations in the Hudson Valley region, this recital is intended for listeners to enjoy through headphones as they walk through nature. The program is comprised {…} On November 3, the people of the United States head to the polls for a crucial presidential election. While the world waits with bated breath for the vote tallies to roll in, Aperitivi will present a mini-concert at 7:00 p.m. ET, featuring a program comprised of BIPOC and women composers. The concert will stream on Aperitivi’s Facebook page and is {…} ViOp Productions will be presenting a streamed performance of the third Act from Leoncavallo’s “La Bohème.” The opera will feature artists from Arizona, Germany, and New York City as they engage in a video performance of the verismo opera. These artists include Melissa Serluco as Musette, Alexei Kuznietsov as Marco, Bonnie Frauenthal as Mimi, Jay Lucas Chacon as Rodolfo, and {…} Several students from the Bard Conservatory have joined forces to create “The Home Music Series.” The artists involved include Korean pianist Sung-Soo Cho, soprano Meg McClees Jones, baritone Wayne Arthur Paul, and Filipino mezzo-soprano Pauline Tan. “We have decided to create a recital that centers on the different ways in which we as individuals experience home through the lenses of {…} Divaria Productions is set to present the digital world premiere of “Rival Queens” on Nov. 12, 2020, followed by a second performance on Nov. 14. The showcase features music from Donizetti’s “Maria Stuarda,” but seeks to dig deeper into the relationship between the two women throughout their lives (rather than the limited months as portrayed in the Italian opera). The {…} 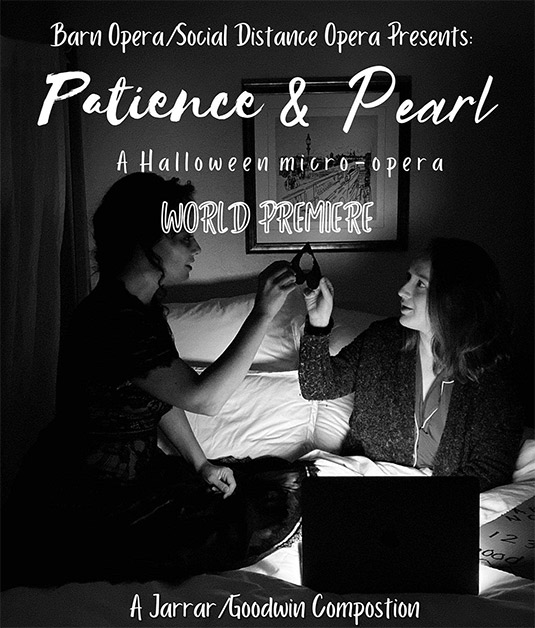 Frequent collaborators, composer Felix Jarrar and librettist Bea Goodwin, continue their string of operatic works with “Patience and Pearl,” a micro-opera relating the story of Pearl Curran, a historical 20th-century medium with the ability to channel the words and poetry of the supposed spirit of Patience Worth. The filmed performance, scheduled for October 31 at 8:00 p.m. ET, is a {…}

Fresh Squeezed Opera has announced a series of conversations with several major composers throughout November. It all kicks off on Nov. 12 when the company talks to Kate Soper about her upcoming “Romance of the Rose.” On Nov. 16, Brittany J. Green will be in the spotlight, conversing about her collaborations and work with electronic music. The following day, on {…} Opera Zuid has announced that it will be streaming a double bill of “La Voix Humaine” and “L’Heure Espagnole” on Nov. 14, 17, and 22 throughout the Netherlands. The performances will take place at the Maastricht, Netherlands and will feature a production made in collaboration with the Nouvel Opéra de Fribourg, Switzerland. “La Voix Humaine” will star Talar Dekrmanjan while {…} Curio Arts launched an inaugural concert event on Oct. 25, 2020 at the Norwood Club in New York City. The organization was founded by Rhumi Maher, bass Kofi Hayford, and mezzo-soprano Viktoriya Koreneva in response to the challenges the COVID-19 pandemic presents to artists all over the city. “In this dire economic state, so many artists are struggling to fund {…}