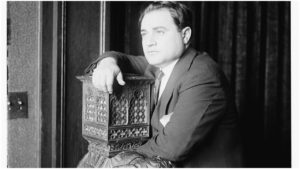 Beniamino Gigli is one of the most famous tenors in history.

Born on March 20, 1890 in Recanati, his father was a shoemaker who was passionate about opera. While his family didn’t really care to see their son take on a career as an opera singer, Gigli moved forward and wound up winning an international prize in 1914. That same year, he made his debut in “La Gioconda” in Rogivo, launching his career.

Major debuts all around Italy ensued, including La Scala in 1918. In 1920, he made his first ever Met Opera appearance and became a fixture with the company, singing in over 500 performances over a 40-year span.

When Enrico Caruso died in 1921, Gigli was seen as his heir-apparent.

During World War II, he remained relatively inactive and was heavily criticized for favoring Mussolini. However, he would eventually return to the stage and started appearing in a number of films.

In his latter years, Gigli gave more concert performances. He died in 1957.

The tenor sang a wide range of roles in the Italian repertory, though his most renowned roles were those of Rodolfo in “La Bohème,” Edgardo in “Lucia di Lammermoor, “ and the title role of “Andrea Chénier.” These were among the roles he performed most often in his career; he also recorded “La Bohème” and “Andrea Chénier” in full.

What he and Lauritz Melchior shared in common

Here are nine hours of recordings of the historic tenor.