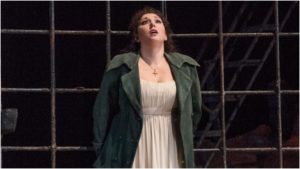 Artist Of The Week: Jennifer Rowley

It’s been a whirlwind few years for Jennifer Rowley. The soprano, who had a huge breakout at the Metropolitan Opera in “Cyrano de Bergerac” during the 2016-17 season, has since been in demand all over the world creating memorable portrayal in such roles as title roles as Tosca and Medea. This week, she brings the role of Leonora to the Maggio Musicale Fiorentino, where she will make her company debut.

Rowley, who last performed Leonora in “Il Trovatore” at the Met and the Opéra de Paris, made huge waves with OperaWire noting, “From start to finish her Leonora was a potent and confident woman, singing passionately in her opening aria to mirror the intense love she felt for Manrico.” This time she will sing in the Maggio Musicale’s trilogy production, which will unite “Rigoletto,” “La Traviata” and “Il Trovatore” showcasing a unifying story arc. Rowley is sure to impress Italian audiences with her impressive vocal skills and intensity on stage.

And for those who are not present for these performances of “Il Trovatore,”  Rowley will be back in the spring for a concert with Fabio Luisi. She will also be back in New York where she will reprise the role of Tosca in the production, which brought her great acclaim and she will also perform the role title role of “Adriana Lecourevur.”

For those who are familiar with Rowley’s voice, the soprano can be heard on a DVD of “La Bohème” from the Den Norske Opera. Here are also a few clips from her “Il Trovatore” at the Metropolitan Opera.